Mind the internet metrics when investing in startups. They might all be fake!

Mind the internet metrics when investing in startups.

We well know that, when investing in startups, lack of information is a key pain point for investors[1]. All the main KPIs, which are normally scanned through in any other type of investment, are very often just not available. Many startups going for a financing round simply don’t have revenues and even less profits to show to potential investors. That’s why alternative KPIs, such as team experience, customer reaction and internet metrics become crucial.

Let’s talk about these last ones. Internet metrics have normally delegated the important task of creating the “WOW” effect into the audience. It is what founders use as a window to the future. Web site visitors, time spent on the platform and percentage of returning users, are communicated as numbers but they are automatically understood as potential profits by investors.

These were the numbers that get Facebook billions of investments even before it generated any revenue: 70,000 users and over 3 million daily page views; user base was growing at a rate of around 10,000 per week. This was the key of their pitch. That was the pillar of their success in front of investors.

Internet metrics are so important because they tell the level of engagement of the users/customer with the platform. You just need to multiply by a variable “x”, representing the profit per user, to get an insight on the potential financial income.

So? Just look at them when making an investment decision, right?

The chance is that these numbers are just fake.

Max Read pointed this out on a recent article on the New York Magazine article[2] revealing that internet traffic metrics from some of the largest tech companies are overstated or fabricated. How? The process is quite simple, malware-infected computers replicate mouse clicks, views and scrolling on targeted websites, without the user even knowing that is generating this traffic.

When it comes to number the reality is astonishing, stating that less than 60% of internet traffic is human.

It is not the first time that a journalist unshadows this dark side of internet KPIs but it is what followed the article that has a potential of an heart quake for the industry. Ellen Pao, ex-Reddit CEO, tweeted, in response to the NY Magazine’s article that “it is all true” and this is the first time that a tech giant (former) executive, confirms what, until now, could have just been classified as journalistic speculation. 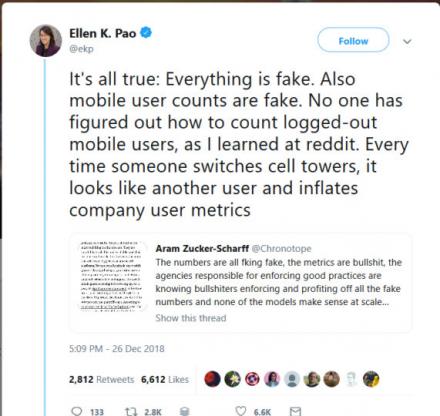 “”It’s all true: Everything is fake,” tweeted Pao, adding “Also mobile user counts are fake. No one has figured out how to count logged-out mobile users, as I learned at reddit. Every time someone switches cell towers, it looks like another user and inflates company user metrics.”

How to relate this information when investing in startups?

First think is looking at suspicious behaviours in the internet metrics. Eg. if the user volumes peaks or drops of all a sudden – without any rational explanations for it- the alarm bell should start ringing. Cross information is another crucial step. Enormous number of site visitors and no or limited social media engagement, SEO presence or press coverage, is another suspicious sign.

There are many further checks to make to rely on these KPIs but only one winning strategy: never rely fully on them!

Startup success is a very complicated matrix, and companies, to fulfil their ambitions, need to be successful in all the area of the business and assessing their potential is a full scope exercise. You can hardly find shortcuts suggesting a road to success. Your objective is to spot interesting insights and match them with all the other information you can get.

[1] For further reading on this topic: https://www.bloomio.com/reports/Bloomio-IMD-Report-The-state-of-equity-crowdfunding-2018.pdf

Between Hollywood and Silicon Valley. 10 celebrities investing in startups